skip to main | skip to sidebar

I know... every body's got an add on post. I've been a longtime user of basic wow mods (you know the stuff that comes off the discs). And I've always had the full package of CT for the raid assist crap. I recently downloaded it and was fiddling around with it and I don't know maybe I should have fiddled around with it before but it seems to me to be a lot more user friendly and pretty than it was before.

All that aside Necrosis is a must for a warlock. It's beautiful. If it did nothing more than darken the screen and make big letters that say "Nightfall has proced" than I would download it. The shard warning counter is also nice. The only issue I have with it is that if you forget to turn in off after logging onto a warrior it sticks around with no way of getting rid of it unless you log out and turn it off. Also I'm not sure if backlash will do the same proc thing that nightfall does but you think it would.
Posted by Dave at 22:30 10 comments:

If you haven't already seen it on WoW Insider or Gitr's blog see it ( http://jebus.geek.nz/WoW/armory/) <- There

Oh well, you can go check it out anyhow and see if you can get it to work.
Posted by Dave at 02:20 2 comments:

Between the new workout schedule I've put myself to and the horrible latency I've been hard pressed to convince myself to go lag...e r uh I mean play some WoW. Nargel is STILL in the Forsaken starting area due to that fact. I recall taking some screen shots, nothing spectacular, but I will filter through them in a bit and see if there's anything worth posting..

Ok, so after sifting through the trash I find one that I did in fact take for the sake of showing my latency. 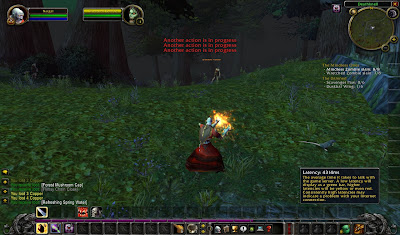 As you can see, by enlarging the pic, I'm casting immolate. Number 1 is bold, fire around the hands but...
OH MY! Where's my casting bar!? Dunno but as you can also see shadow bolt is highlighted and "another action is in progress"(bold red letters front and center)
So... Whenever that immolate does cast that blasted zombies gonna have an exploded fricken head when... wait... that zombie was dead from immolate and stabs before my shadowbolt got let loose >.<
BTW I think that Nargel is the ripe old level 5 now.
P.S. latencry 4TL in peeveepee.
Posted by Dave at 22:39 No comments: 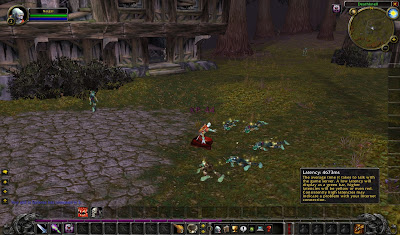 This is Nargel. He is my shiny new forsaken warlock and prospective member of Buttered Monkey's guild.

This character was build by the desired class and name.
First of all I wanted a warlock. I've played a warlock up to 40something on a PvE server and met some Fine folks at http://www.gitrsblog.us/ so I decided that would be the server I'd play on.
Now I got the what and the where but what would I name him and what race would I choose? Well, After much studying (Couldn't give a cool class a lame name) I found this name Nargel.

What's so cool about that name sounds pretty normal or maybe even nerdy.
It just so happens Nargel http://en.wikipedia.org/wiki/Nergal is the son of Enlil (Most powerful god of Babylonia!) Also described as god of fire, death and decay. So with that IMO Forsaken fits the bill better than Blood Elves or Orcs.
Posted by Dave at 22:33 3 comments: 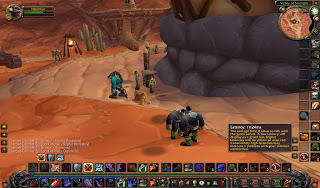 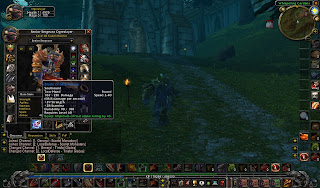 This here is where I logged in to check auctions.. forgetting that I was farming SM when my battery went dead. So, I logged in at the GY and thought to myself yes misfortune indeed.

Er... I got the images flip flopped the wrong way but whatever.. so after retrieving my corpse and lagging er.. did I say lagging I meant hearthing to Orgrimmar. Where did I go? Who are all these "Unknown" people? I thought you could only have one given name per server... well Unknown seems to be a common name on laughing skull.. er.. right!

Anyhow I made my way from this A.O. to the "other" mailbox.. All you hordies know which one I'm talking about, and collected my mail.

For some reason, the latency at the "other" mailbox was 2k less than this pic. Anything to do with the massive amounts of people that go to the Orgrimmar AH and bank? Pure speculation however I think there may be a shred of truth in it.
Posted by Dave at 22:20 1 comment:

I figured out how to convert screenshots 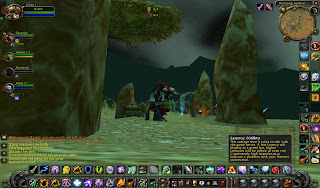 This is a screenie of my lag here in Iraq. It's kinda a dated pic. I was playing my shaman about a month ago on Ursin. Now that I've figured out how to take screenshots expect to see more. It's a bummer cause I think all my raid and other interesting screenshots are on my desktop back in the states.
In this particular instance I was in WSG and some idiot was asking for buffs when there was no buffers about.
Posted by Dave at 06:43 No comments:

I've downloaded frapps recently and was trying to figure out what the hell is wrong with it. I tested it out on NWNs and it worked fine. You know, the screenshots of crumby graphics and short videos of just running around. However, when I loaded world of warcraft, took a few test shots and test vids all I come up with is black .jpgs and no video. In the help it says the FPS (there is a FPS indicator shown on the gaming screen via fraps) should turn red when I hit the record button and they do for a moment and quickly turn yellow again.

Anybody out there work fraps or know a better video capture method for WoW? I could use your help trying to figure this out. Then I can start posting screenshots of my horrendous lag here. >.<
Posted by Dave at 21:58 3 comments:

For the past week I've been busy. Most of the time I've been in places where Internet is pretty scarce. However, when I have found a connection that would make it so I could play (without lagging so horribly that by the time my corruption actually cast it was already done and the target dead) I found myself playing my warlock on laughing skull. I found that there's a LOT of blelfs running around and everyplace I went to grind there was always people there. Now laughing skull used to be a high population server but every time I've logged on (since many of the major raiding guilds did a server transfer when transfers first started) it's been Med. population.

I've also been having fun playing the AH. I've saved up enough money with my 22 blelf lock to be able to buy an Imbued nether weave bag (out with that crappy 8 slotter). So, now when I get back to grinding I'll have 10 more slots to fill. Also I might mention that I bought a 20 slot mining bag and a 20 slot soul bag. It's so nice not having a bag full of rocks or soul shards scattered throughout my inventory.
Posted by Dave at 21:38 No comments:

More of the same..

Yep,
More of the same here in Iraq. The wireless Internet still isn't all that great. I had to giggle a little inside when some reporters were walking around with their MAC laptops trying to get a signal while I sat there quietly with my HP playing WoW. Eventually one of them found or bought (Couldn't tell you which) and came back and finally could get a signal.

Moving right along. wireless is the only option for Internet where I'm at in Baghdad.. so be it. I've found at times it's just so bad from disconnects and just overuse that it's not even worth trying to play. I've even went so far as to buy a wireless antenna to boost my signal but it seems that the satellite is just plain getting worked too hard. Damn those profiteers!

That's all for today

Yeah,
I came up short for a title to this post. Due to popular demand the colors have been worked around a little bit. I'm still wrestling with how the heck I'm supposed to put pics up for background or how to split and do things the way I like. I guess that's what I get by using a template and not knowing how to work HTML.

Still open to suggestions.
Posted by Dave at 05:04 2 comments: 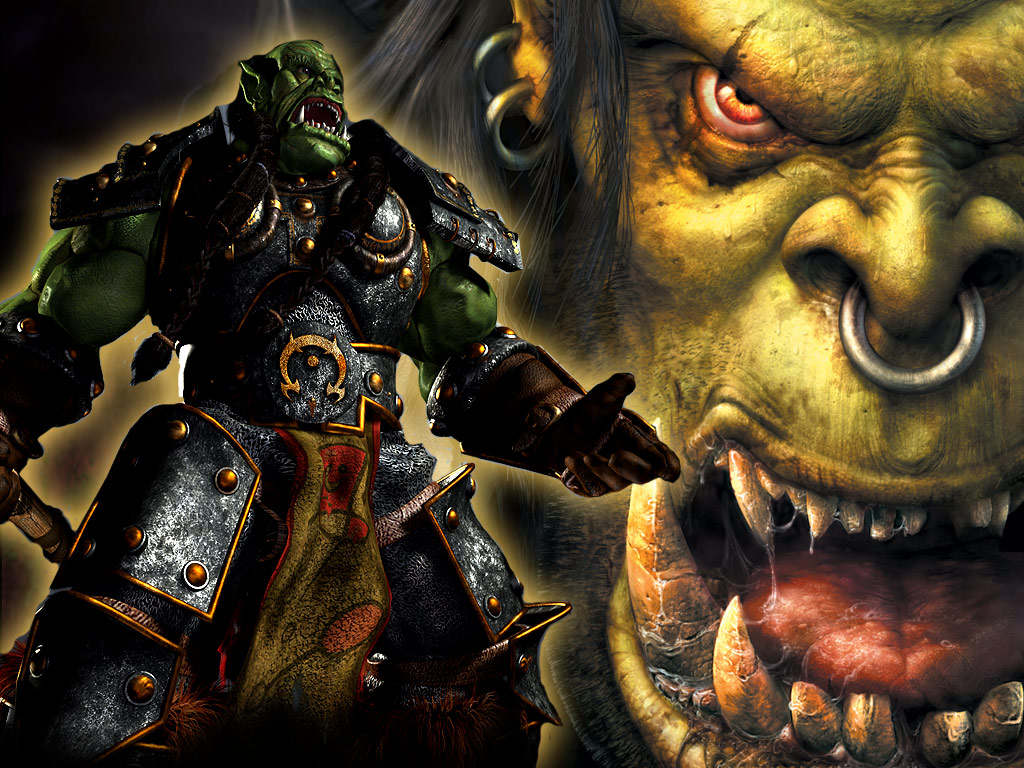 May your axe be swift!

Stuff I read about wow

Dave
I'm a 27 year old soldier in the US. Army. Happily married with 2 sons and a wicked WoW addiction.